Duke is pleased to host a ceremony and reception on the Duke University campus for the Class of 2023 students who cannot be in Kunshan, China for the DKU Commencement Ceremony. The celebration will take place on Thursday, May 25, 2023, starting at 2 pm at the Karsh Alumni and Visitors Center.

In addition, all DKU international students in the Class of 2023 who are studying at Duke during the Spring 2023 Semester, or studying remotely, are welcome to participate in Duke’s Commencement Weekend events scheduled for May 12-14.  All information about the Duke Commencement Weekend events will be communicated to Class of 2023 students by the Duke Office of Special Events and University Ceremonies in early 2023 via  https://commencement.duke.edu/.

Your J-1 program end date on your DS-2019 is May 7, 2023. Starting on your program end date, you have a grace period of 30 days to depart the US. You can use this time to travel within the US. However, if you leave the US during this grace period, you will not be admitted back into the US without a new visa.

Guests who need to apply for VISAs in order to visit Duke University should submit this paperwork so they can attend the DKU commencement at Duke.

Duke will provide letters of invitation for U.S. tourist visa applications for graduates and their families to attend the ceremony in Durham. However, students and families are responsible for initiating and tracking the visa application process and observing all deadlines and requirements.

If you need a letter for visa purposes, please send the following information to dkurelations@duke.edu.

If you are studying at Duke in the spring and living in campus housing, you will be able to extend your housing until Friday, May 26, at noon at no additional charge. You may be required to relocate to a different residence hall from May 8 until May 26. The application for this this extension will go live on April 3 via the HRL housing portal and will be due April 11.

If you apply for the campus housing extension, you are eligible to request additional dining points at no additional charge. More information to follow.

If you are currently on the Duke Student Medical Insurance Plan (SMIP), your enrollment is through May 31, 2023 so there is no action required.

Information will be provided soon.

You may pick up your apparel during the following dates and times.

You may arrange for someone else to pick up your apparel, but they must know your size.

If you are not currently at Duke, contact dkurelations@duke.edu to schedule apparel pickup on May 24 or 25.

To protect the health and safety of our campus and local communities, all visitors to Duke are strongly encouraged to be fully vaccinated for COVID-19 prior to coming to campus. Visitors must also comply with Duke’s masking requirements.

Visitors should check this site before coming to campus and follow directions provided by campus personnel while visiting.

The ceremony and reception will be held at the Karsh Alumni and Visitors Center from 2-5 pm. A detailed schedule will be added later.

Durham offers many diverse lodging options. These include downtown hotels close to the city’s center, more rustic bed and breakfasts, and everything in between. We strongly recommend making reservations well in advance.

The Durham Convention and Visitors’ Bureau (at 800-446-8604) is a valuable resource for finding lodging in Durham. To find lodging options near Duke’s campus, filter by the following regions:

Downtown Durham is a historic and vibrant area with many restaurant and entertainment options including the Durham Bulls and the Durham Performing Arts Center.

Southwest Durham is a more suburban part of Durham, closer to Chapel Hill. It includes a shopping mall, The Streets at Southpoint, and is only several miles from Jordan Lake.

SE Durham, including RTP and NCCU

Research Triangle Park is one of the largest research parks in the United States. It is home to over 200 companies and is a leader in scientific research. The RTP district is located in Durham and is approximately equidistant between Raleigh and Chapel Hill.

21c Museum Hotel is a contemporary art museum in downtown Durham that doubles a hotel.

Aloft Durham Downtown is a modern hotel that opened September 2015. It is located downtown next to the Durham Performing Arts Center.

The Durham Hotel opened in July 2015. It is in a converted historic Durham building in the heart of downtown.

Hilton Garden Inn Durham/University Medical Center is less than a mile from Duke University and the medical center, with a free shuttle to local destinations.

JB Duke Hotel opened in 2016 and is located on Duke’s West Campus.

Residence Inn: Duke University Medical Center opened in the summer of 2015 and is directly next to Duke East Campus.

The Washington Duke Inn and Golf Club accepts accommodation request forms beginning in January of the year prior to commencement.

Unscripted Hotel opened in July 2017 and is a contemporary property downtown.

Between Duke and RDU Airport

The town of Chapel Hill offers more nearby lodging, dining and attractions. Information on hotels, restaurants, and events in Chapel Hill can be found on the town’s website.

The reception and ceremony will be held at the Karsh Alumni and Visitors Center from 2-5 pm. 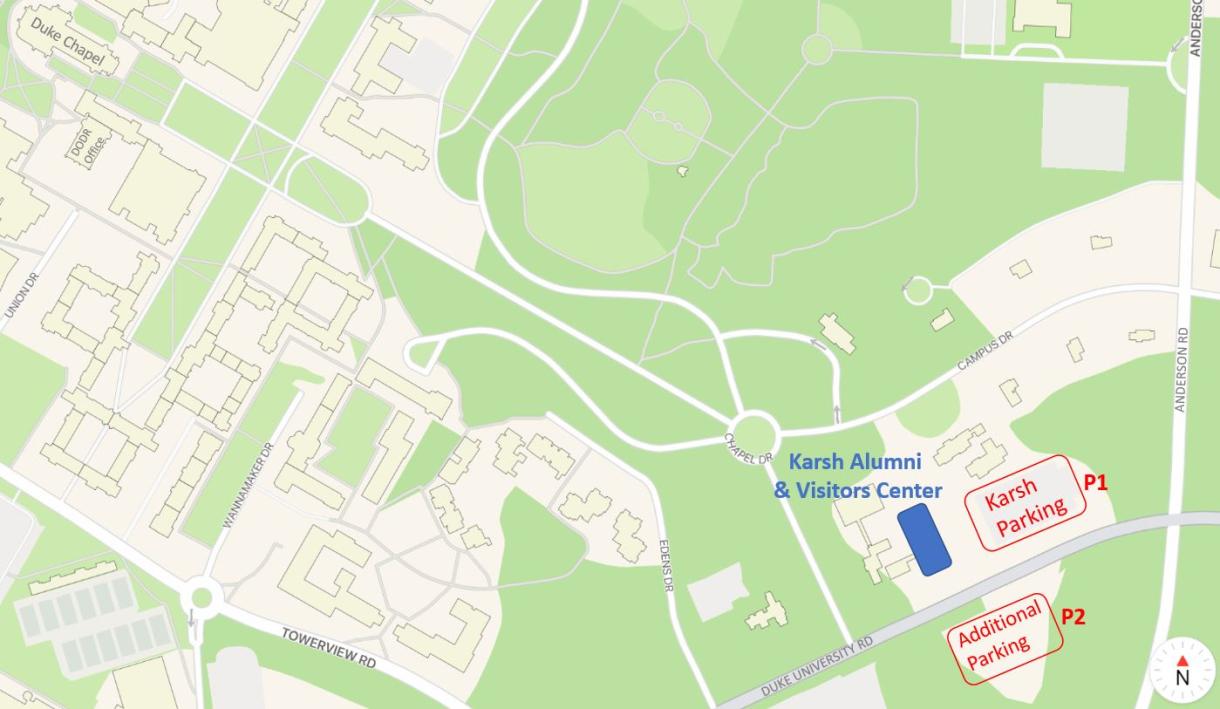 The main parking location for the reception (P1 on the map) will be at Karsh Alumni and Visitor Center. Parking here is complimentary. Handicap parking is available.

Additional parking (P2 on the map) is available at the green zone gravel lot off of Duke University Road across the street from Karsh Alumni and Visitor Center. Parking here is complimentary.

FAQs – Answers to your most frequently asked questions.

Yes. If you are studying at Duke in the spring and living in campus housing, you will be able to extend your housing until Friday, May 26, at noon at no additional charge. You may be required to relocate to a different residence hall from May 8 until May 26. The application for this this extension will go live on April 3 via the HRL housing portal and will be due April 11.

No. Duke residence housing is not available to DKU students not in residence during the Spring 2023 Semester. Visit the “Where to Stay” section for information about lodging in and around Durham.